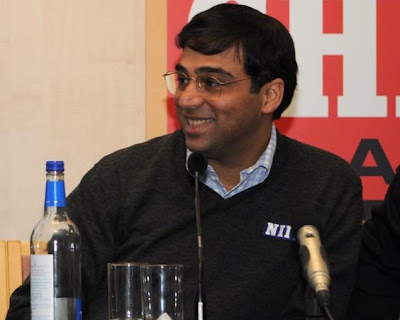 Viswanathan Anand is TVH ambassador
June 27, 2012
DC chennai
World Chess champion Viswanathan Anand took on another role on Tuesday when he became the brand ambassador for realty firm True Value Homes (TVH). This latest endorsement sees a new Anand, who has been associated mainly with NIIT for the last 13 years.
The soft-spoken Chennai “Tiger” Anand is naturally keen to bring some chess into the corporate social responsibility of TVH. “I hope we will do some interesting things together including a few things related to chess,” the five-time world champion told reporters.
He added that the projects could have separate sports facilities for chess and other games.
The company is also planning to take chess to weaker sections of the people and to schools and organise annual tournaments.

Stating that TVH had excellent value systems, Anand said, “I always like my chess to do the talking and not words. Similarly, I think TVH will also allow their successful projects to do the talking.”
Noting that he himself was a satisfied customer of TVH as he had bought some flats from the company seven years ago, Anand said that he was comfortable with the company’s value systems.
“Being quiet and focussing on excellence is the motto of both the company and myself,” he added.
While TVH will be the first South Indian company to be associated with Anand, the world champion said that he was open to endorsing more brands. “It all boils down to integrity. If a right brand comes along, then we will do it,” he added.

With Anand’s popularity graph rising abroad, TVH is looking forward to promoting its projects among NRI customers across the globe. TVH Group of Companies chairman Mr N. Ravichandran said Anand was known for his impeccable character, strong value systems and very strong mind.
“These characteristics fit our group, which has created a niche in the market with a steady growth,” he added.