Anand took down Kramnik to finish 2nd in Zurich 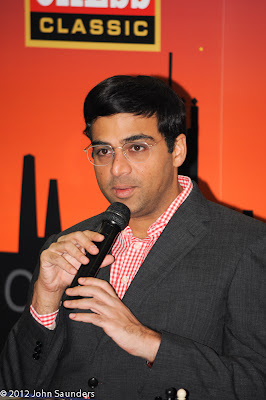 Anand beats Kramnik to finish second in Zurich Chess
Zurich (Switzerland), Mar 2, 2013 (PTI)
World champion Viswanathan Anand capitalised on a blunder by Vladimir Kramnik of Russia to beat him in the final round and finish second in the Zurich Chess Challenge that concluded here.

The Indian ace was under pressure to come back to a 50 per cent score after losing to Fabiano Caruana of Italy in the fourth round and got lucky when Kramnik had a rare oversight resulting in a full point and the first victory for the world champion in the tournament.

Caruana, meanwhile, deservedly won the tournament finishing on a high with a fine victory over Boris Gelfand of Israel in his last round game.

The Italian finished with a very impressive tally of four points out of a possible six in the four-player double round-robin tournament.

Anand finished sole second with one win, a loss and four draws tallying three points in all.

That he left the field a full point behind speaks volumes about the talent of Caruana who is sure to find his way back in the top ten of world rankings after an excellent performance here.

Kramnik and Gelfand ran out of steam in the last round and finished with identical 2.5 points apiece to tie for the third spot.Source: http://www.deccanherald.com
Posted by Chess Strike at 21:00