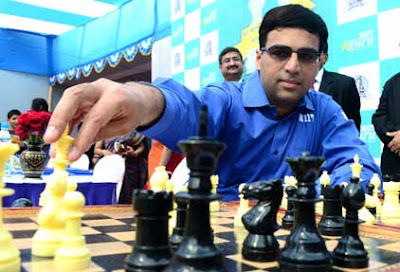 The World Chess Championship 2013 will be held in Chennai between November 6 and 26 at Chennai and the state government will allot Rs 29 crore for the event, Chief Minister Jayalalithaa told the Assembly on Monday.

Ms. Jayalalithaa said when the World Chess Federation president Kirsan Illyumzhinov met her in 2011, he had requested her to hold the World Chess Championship in Chennai. She also had agreed to organise the event at a cost of Rs. 20 crore.

“However, it failed to materialise as Russia made the highest bidding for the championship. Since Tamil Nadu came forward to organise the event in 2012, The Word Chess Federation agreed to hold it in Chennai without bidding,” she said.

Ms. Jayalalithaa said the international event would further encourage the youth to learn chess and would lead to creations of more and more champions.
Source: http://www.thehindu.com
Posted by Chess Strike at 21:32